6 Superstitions to Boost Your Gambling Luck

If you’re Irish, not only are you anxiously anticipating your favorite party holiday’s arrival this Friday, but you’re also allegedly blessed with a permanent good luck charm — the luck of the Irish! In fact, Irish folklore is rich with lucky vibes, from the famed but rare four-leaf clover to the magical, mystical rainbow, there are plenty of charms to go around.

So, with St. Patrick’s Day only a few days away, we thought it was only fitting to discuss some of the superstitions and rituals that our fellow gamers employ to help boost their luck and beat the odds. Here are six of the most popular:

As you can see, there are a whole lot more good luck charms than just your average four-leafed clover or rabbits foot! How do you and your buddies boost your odds when playing? We’d love to hear all about your wild and whacky good luck charms and rituals on our Facebook page!

Casinos by M&M is a casino & DJ party company serving the Tri-State New York area. We specialize in authentic casino parties and party supplies. Our charismatic, professional dealers and exciting casino action will make your next party one to remember. For more information about our services dial 1-800-HAVE-A-BLAST!

Yesterday was International Women’s Day, but here at Casinos by M&M, we’re celebrating the entire Women’s History Month of March. As you know, there have been many important women that have shaped our country’s history: Elizabeth Cady Stanton, Florence Nightingale, Rosa Parks, Eleanor Roosevelt — the list goes on and on. But, did you know there are several women in the poker world that have helped contributed to the casino world as well?

In no particular order, here’s our list of the top 5 female poker players in history:

Though they’re all individually unique, hailing from different countries and playing with different strategies, they all still have one thing in common — dedication and determination. These women worked hard to make a name for themselves in a male-dominated arena, and to that we salute them!

Casinos by M&M is a casino & DJ party company serving the Tri-State New York area. We specialize in authentic casino parties and party supplies. Our charismatic, professional dealers and exciting casino action will make your next party one to remember. For more information about our services, visit our website or dial 1-800-HAVE-A-BLAST!

The casino and gaming world is rich with fun facts and cultural history. So rich in fact, that we’re positive even the most devoted gaming aficionado might not be able to name all ten of the fun facts we have listed out below:

Fact #1: The word casino is derived from an Italian word, meaning “small villa,” or “summerhouse,“ built purely for enjoyment. Later in the 19th century the meaning shifted to include public entertainment spaces, which is how it eventually became associated with the gaming world.

Fact #2: Those flashing lights on top of the slot machine are actually called candles — only these kind you don’t want to blow out. Instead, you hope they light right up!

Fact #3: The popular phrase “jackpot,” originated as a form of poker. In this variation, the pot continued to grow until a player could open the bidding with a pair of jacks or better.

Fact #5: Money raised from gambling and lotteries has been used to fund many public building projects, including construction of The Great Wall of China.

Fact #6: On that note, it is said that former President Richard Nixon used funds from bets he won playing cars in the South Pacific during WWII to fund his congressional election campaign.

Fact #8: The first slot machines didn’t always pay winners in cash. In fact, the bar owners who housed these machines was at liberty to award prizes however he/she saw fit, most often in the form of free beer or cigars.

Fact #9: FedEx creator Fred Smith used the last of his company funds to take to the blackjack tables in Las Vegas. His hope was to win enough to pull his business out of debt, which he certainly did!

Fact #10: The Super Big Bertha is the largest slot machine in the world, at over 8 feet tall and 6.5 feet wide. It’s eight spinning reels make the odds of hitting a mere 1 in 25.6 billion!

If you’re planning an event to celebrate the holiday season, contact Casinos by M&M to learn about our casino and party entertainment options! For more information dial 1-800-HAVE-A-BLAST or visit us online.

6 Great Gamblers Who Beat The Odds

Everyone walks into a casino thinking “today is the day my luck will change,” but unfortunately for most, it rarely does. But what if luck had nothing to do with your winning or losing? Here are six people who — either through great intelligence, practice or just plain cheating — knew they would be leaving a winner.

As the first person to exploit the wheel bias in roulette, Garcia-Pelayo was able to beat the odds. Wheel bias is the belief that every roulette wheel favors some numbers over others, because of minute differences in the internal gears and leveling. Using what he learned from studying hundreds of wheels, he bet on that wheels’ “hot numbers,” giving him a 15% edge over the house. For a decade he studied and hit every casino from Spain to America, earning a total of $1.5 million in winnings.

After decades of research and development, Taft created a wearable computer that helped him count cards. After just one week, Taft won $40,000. His other famous inventions include a belt buckle video camera, used to see the dealer’s hole card and a computer that could tell the positioning of cards in a perfectly shuffled deck.

Ida Summers’ good looks, small frame and social graces allowed her to pull off the most daring cons ever attempted at a casino. Summers was a pro at swapping out the dealer’s deck with her own pre stacked ones, known as a cool deck. After thousands of dollars won and even more people conned, her luck ultimately ran out when the FBI arrested her.

Also known as the man who could beat any slot machine, Carmichael made his fortune by hacking nearly every machine across Las Vegas. Carmichael created a “light wand” that he was able to insert into a machine, cut off the light sensor and drop the coins. Ironically, Carmichael now works with slot machine manufacturers to help make foolproof machines.

Unlike others who tricked the game in order to make money, Colavecchio went straight to the source. Throughout the 90’s, he created almost exact replicas of slot machine coins. He was not caught until casino managers realized there were thousands more coins in stock than were ever ordered by the casino itself. Like Carmichael, he too now works with law enforcement to prevent and catch counterfeiters.

Known as the father of card counting, Thorp not only used the method, he also created it. By essentially keeping track of what value cards were where on the table, Thorp and his friend, Claude Shannon, left the casino with roughly $70,000 every time. Because no one had ever heard of card counting, Thorp was never actually caught, but he was kicked out of every casino he entered because he was suspected of cheating.

Think you have what it takes to beat the house? To learn how you can face the dealer with family and friends on your very own blackjack table, visit Casinos by M&M online or dial 1-800-HAVE-A-BLAST.

In honor of Black Cat Appreciation Day, we thought we’d shed some light on a few of the most well-known gambling superstitions. Lucky numbers? Pre-roll rituals? You name it, we’ve got it — and there’s plenty more where that came from in the casino! 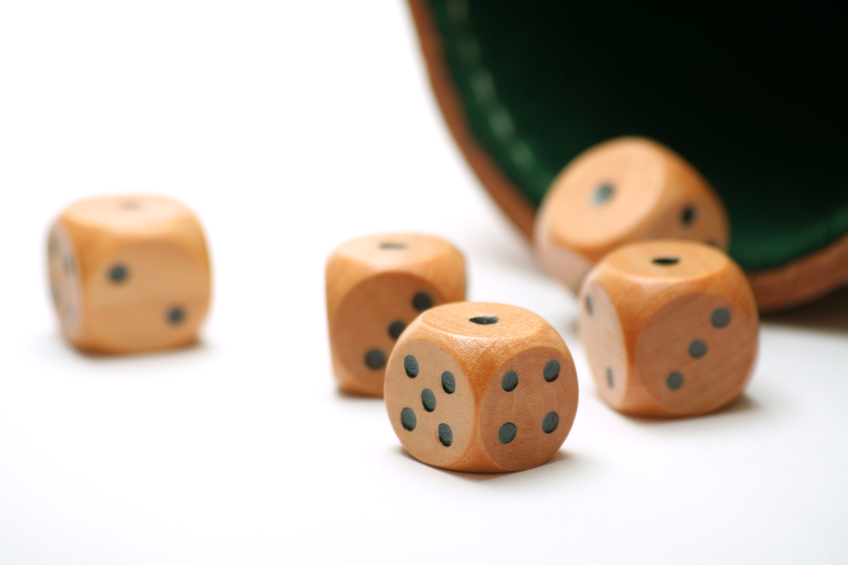 Beware of the number 13. The number 13 has a bad wrap across many cultures for being unlucky — think ‘Friday the 13th.’ So much so, that many Las Vegas hotels have omitted the 13th floor altogether. Wouldn’t want to give guests stay on that floor bad juju!

Hold the fifties please. For years gamblers have steered clear of $50 bills. Legend has it that mobsters would stow a crisp fifty  in the pockets of their victims before burying them. From there, the superstitions surrounding the $50 bill were born.

Purchase red undergarments. Chinese New Year celebrations boast the color red, and for good reason! The color is said to symbolize good fortune and joy, and to bring prosperity to those who wear it — and wear it they do! Many gamblers pack a pop of red in their suitcase, most often flaunting red underwear.

“Never count your money, when you’re sitting at the table.” Kenny Rogers had it right when he said this line in his hit song, The Gambler. Not only is it considered unlucky to tally up your earnings at a casino table, but it’s also bad taste.

Cut out the crossing. You fingers, your legs and even your arms should remain uncrossed at all times. Superstition says that crossing can “cross out good luck,” and we wouldn’t want that would we?

Keep your hands to yourself. Touching other players, particularly on the shoulder, is forbidden at the table. It’s considered rude and therefore unlucky.

Don’t wash those hands. If you’re playing a hot hand and keep racking in the chips, you don’t want to wash that luck away! On the other hand, if you’re on a losing streak, washing your hands is thought to help change the course of your luck.

Has all this casino talk gotten you in the mood to gamble? Why not press your luck with Casinos by M&M! Just call 1-800-HAVE-A-BLAST or visit our website to learn how we can help make your corporate event or family gathering a night to remember.